With the Super Bowl fast approaching, we thought we would take a look at some of the most popular traditions!

Brush Up on your Roman Numerals.

In it;'s 54-year history, the Super Bowl game has always been designated by a Roman numeral. This has held true, with one exception, four years ago they ditched the Roman Numeral 'L' in place of the more modern '50'. But rest assured, they are back to normal with this years SuperBowl LIV.

While some people spend their time before the big show scooping guac, eating wings or drinking beer, there are just as many glued to the TV. It is a chance to catch all the commentary, predictions and pre-game performances, ending with the singing of the National Anthem.

Forget about the Football, it's all about the food! 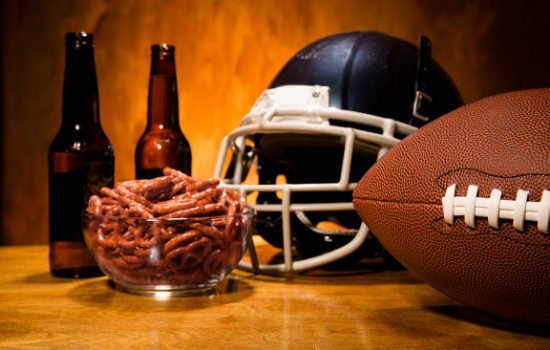 According to the 'National Chicken Council' (It is a real thing, we swear), Americans will eat a record 1.4 BILLION chicken wings over Super Bowl weekend.

However, the #1 Super Bowl Food is Chips and Dip with a staggering 28 million pounds of chips being dipped over the weekend.

This is the moment everyone has been waiting for! The last few seconds before the game gets underway. It is the teams who will kick and who will receive. For a full listing of the SuperBowl coin toss results and stats click here.

Whether it's Lady Gaga's 'Roof Jump' or Katy Perry's 'Show-Stealing Shark'- everyone has their favourite Super-Bowl Half-Time Performance. Pretty much since the beginning, the half-time show centres around a theme performed by a marching band. However, the late 80s and early 90s brought a surge in performances by popular music groups. This tradition grew, and modern half-time shows are now nothing short of an extravaganza. This year will see Jennifer Lopez and Shakira take to the stage (pitch).

Got some spare time? Take a look at this mash-up of the Top SuperBowl performances!

What would a SuperBowl Victory be without dousing the winning coach in Gatorade? The origins of the 'first shower' are highly contested. While some claim the honour goes to the Chicago Bears who schemed to get coach Mike Ditka wet after a regular-season win over the Minnesota Vikings in 1984. However, some say it started when the NY Giants won over the Washington Redskins in 1985. Don't have a clue what we are on about? Take a look at the example below.

Gatorade Colour Betting - A Guide to the Super Bowl Tradition.

You're the coach of the winning team...you're giving your first on-field interview, then it hits you - a cold case of coloured water!

Did you know that guessing the colour of said Gatorade is now one of the more popular betting options for the NFL'S big game - alongside the previously mentioned coin toss.

Pretty much every American (and many others), whether they like football or now, will tune in on Super Bowl Sunday for the biggest oxymoron of television history: to watch the commercials. To many, this poses the biggest conundrum of all. When are you supposed to run to the bathroom? Or go to the kitchen to get more snacks?

Have a look at one of our favourite Super Bowl Ads below!

This year's Super Bowl takes place on Sunday the 2nd of February with Kansas City Chiefs taking on the San Fransisco 49ers, will you be tuning in?