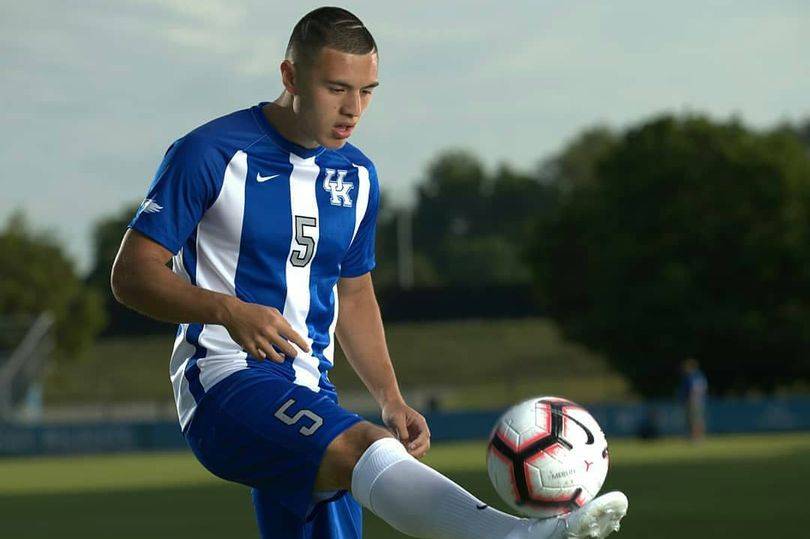 Hang around at Hearts for another year in Scottish football’s goldfish bowl or take the plunge and dive into a US scholarship that could lead to a dream MLS move?

That was the choice Leon Jones had two-and-a-half years ago. And having excelled in the US so far – with a potential call-up to the Chinese national team on the horizon – he has no regrets about leaving Tynecastle for Kentucky.

The young Glaswegian centre-back was one of the country’s most prodigious talents back in 2013. He’d just captained his country to a Victory Shield win over England live on Sky Sports.

“I try to keep tabs on boys I played with back home, When you look at where you are and who they’re playing against, it’s not as attractive as over here or the opportunities you can get from playing football in America. It can be like a goldfish bowl environment in Scotland. But there’s so much more out there if you take a step back and open your eyes...

Some boys are scared to go abroad, leaving their friends and family. They’re scared to take that jump into the unknown – and that’s what it felt like for me. But sometimes in life you just have to take the plunge and hope it works out for you.”

And it has for him. He could have stayed at Hearts and maybe swam around Scotland’s lower leagues if he couldn’t make the breakthrough. But with the help of ex-player Andrew Kean at First Point USA, he went Stateside and is convinced it was the right move. Jones said: “Around March time, Levein offered me a one-year deal but I felt what I’d put in that season deserved more.

“Other players were getting two or three-year contracts. Craig wasn’t willing to budge on a longer deal. He said the only thing I had against me was that I lacked an inch or two in height.Ultimately, I didn’t fit into Craig’s idea of a centre-back. I could have accepted that if I wasn’t any good in the air. But I can’t change my height. I felt that I’d never get an opportunity in the first-team.

“After seeing a lot of boys take extensions before being released a year later, I didn’t want that to be the case with me. Through Andy at First Point, Kentucky had come over to watch me. They offered me a scholarship and I decided to go for it. I’d been at Hearts from the age of seven. I knew everyone at the club and if there was a longer contract on offer, I’d have stayed...But it was tough, I left my decision to the last day possible. It was a big decision. If you get homesick, you can’t just nip home from Kentucky.”

Jones, who came through the ranks with current Hearts ace Lewis Moore, is now loving life in the United States.

He’s getting the best of both worlds, in education and sport, but says his degree will always play second fiddle to football – because he’s as driven as he has ever been to play professionally.

He said: “Here I can do football and studies at the same time. Back home that was never really the case. I’ll be in school from 8am to noon then I have training at 2.30pm. We’ll be at the stadium for 1pm to meet up with the team and we’ll finish at 4.30pm. We’ll then have team meetings or video analysis around 6pm before going out for dinner with the team. At Hearts if I had a single session I’d be finished for 1pm and go home. I don’t know what I’ll do with the degree because I still see it as a back-up."

“I still want to become a pro footballer. That drive and ambition I had as a seven-year-old going to Hearts have never died. I’m still as enthusiastic and determined to make it. I’m just taking a different path to what a lot of people in Scotland might take. Last year Kentucky were the third-ranked team in the country. We won our conference title and the conference tournament, which is like the League Cup. In the NCAA Tournament, which involves every school in America, we got to the quarter-final but lost to Maryland. They went on to win it."

Jones would love to follow in the footsteps of former Wildcats team-mate JJ Williams, who left university for a pro deal with Columbus Crew before signing for Atlanta United. If he can get to the MLS or get a move to Europe or Asia, it could ignite an international career with China. And despite representing Scotland at youth level, he has revealed he’s now keen to earn caps for the Chinese.

Jones said: “My mum’s from Hong Kong so the opportunity to go and play there might be an option for me. We’ve let the Chinese FA know that I’m eligible. The game in China is getting bigger now. A few players from Europe with Chinese heritage are now in the Super League. So that might be an option for me. They’ve been in touch – I sent my CV and video clips – and they seem quite interested.

“They’ve kept an eye on me in Kentucky and if that’s an option for me, why not take it? Not a lot of people know that I’m half-Chinese because I played in the Scottish national team set-up all the way through. It would be a great experience and opportunity...It would be great for my mum. I’m proud of that part of my heritage, it’s not something I try to hide.

“But nothing’s happened for me yet. I still need to work hard and make sure I do the right things.

"Being at an American college it can be a bit like the movies during spring break - there are parties going on everywhere. So you need to concentrate on what you want to do and not follow the crowd. That way, you don't get distracted and mixed up in the bad stuff. There are a lot of distractions but it's up to you as an individual to keep your eyes on the prize."

Thank you to Scott McDermott and Daily Record for this amazing article on our soccer-athlete Leon Jones!

Keep up to date with all the actions by following us on Social Media!