One Year of NIL in College Sports

On July 1st, 2021 the entire landscape of college sports went through a transformational shift with the introduction of the highly-anticipated NIL policy, bringing with it a seismic ripple effect felt all across the globe.

If you aren’t familiar with the concept of NIL, here’s a brief rundown of what you’ve missed.

In short, an athlete’s “Name, Image, and Likeness” are the three main components that make up an individual’s legal “right of publicity” in the USA. This can cover anything from using their face or brand on a promotional item like a card or poster, an in-person appearance at an event, or even something as simple as a social media post.

Until that crucial point in college sports history last year, student-athletes were unable to earn money or profit off any of the aforementioned activities to ensure the legitimacy of the “amateur” status remained intact.

NIL in the college sports world

The buy-in, not only from the student-athletes but also from locally and nationally recognized commercial brands, and the colleges and universities themselves have been astronomical. Deals have been signed, sealed, and delivered from small-town cafes, all the way up to the likes of Lamborghini and Nike, and it’s not just the top 1% athletes in the Power Five conferences that are cashing in either.

The top 10 conferences by total NIL compensation according to our strategic partners at Opendorse are:

The most deals reportedly signed by any individual athlete so far sit at around 66 for Norfolk State running-back Rayquan Smith, who has partnered with multiple local and national organizations including BodyArmor, Arby’s, and Spikeball. 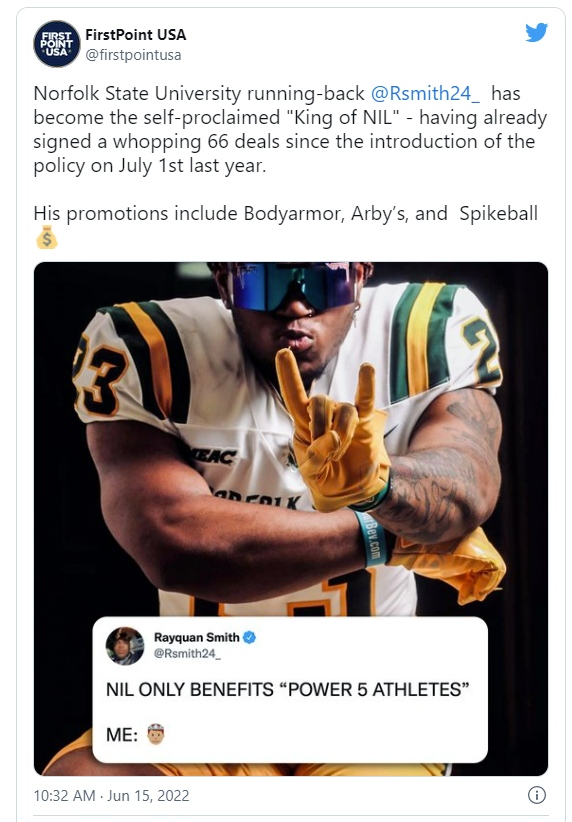 Some of the most profitable NIL deals signed include Ohio State quarterback Quinn Ewers, who inked a deal with GT Sports Marketing for a reported $1.4 million, LSU gymnastics superstar Olivia Dunne whose deal with activewear brand Vuori was worth upwards of $1 million, and Alabama Football’s Bryce Young, who has reportedly made in excess of $800,000 through his deal with Cash App.

The average compensation per athlete has risen to astronomical levels following the continual expansion of activity and the increased awareness of the opportunities across the USA. Just over 6 months ago, the average compensation paid out to athletes across NCAA D1, D2 and D3 crossed over the $1,000 mark and has since risen to almost $3,500, with posting social media content and licensing rights leading the charge on top NIL-generating activities.

Despite early concern amongst college sports fans around the introduction of NIL and the impact it would have on driving down the viewership numbers, a recent survey carried out by Global Sport Institute at Arizona State University suggested that the opposite actually appears to be true, stating:

We recently caught up with Ross Duncan, Chief Marketing Officer of Varsity Six, FirstPoint USA’s creative partner in developing athlete brands to leverage the power of their own NIL, on what we’ve seen over the past year and how it’s impacted college sports and the athletes themselves:

“I think the change in policy has been a welcome addition to the college sports landscape.

Historically, these young sportsmen and women, have undergone a tremendous amount of work and sacrifice to ensure they can handle the demand and stress of a full-time academic and athletic schedule, but have never been permitted to earn a little money along the way”.

“Of course, it’s great to see so many athletes make such a concerted effort to empower themselves and leverage the market in a way that not only allows them to profit at the moment but in doing so, they’re also forming lasting relationships that they’ll be able to take with them through graduation and beyond.”

“At the most basic level, it’s been fascinating to see such a transformational shift in how things are done and the impact it’s had on the business of college sport in America.

The wave of NIL activity has extended far beyond athletes simply looking to profit for themselves, however.

The charitable impact and contributions made by generous student-athletes as part of their NIL mission have been inspirational, with dozens of high-profile individuals like Camron Johnson, a football player at Arizona State University who created a full suite of branded and promotional materials to sell in aid of the National Down Syndrome Society. Johnson isn't the only player dedicating his time and energy to using NIL for good. University of Kansas duo Devin Neal and Kenny Logan Jr. participated in a charitable event to raise funds for Family Promise of Lawrence, an organization helping families to navigate the housing crisis across the local area.

Like it or not, NIL is here to stay. Tens of thousands of athletes have already cashed in on their NIL potential and as the industry continues to grow and mature, the opportunities for student-athletes will undoubtedly match that trajectory in all facets of life.

As the world’s leading sports scholarship consultancy, we have over 20 years of experience in recruiting and placing athletes in some of the top programs in the United States, and through close-working strategic partnerships, our vast international scouting network is perfectly equipped to on-board the very best talent.

For more information on the life-changing opportunities for young men and women that a sports scholarship in the USA can provide, why not schedule a call with one of our specialist consultants today. Alternatively, get in touch with our specialist brand consultancy partners at Varsity Six and discover how you can leverage the power of NIL today.