The Financial Might of College Sports Media Rights Deals

It’s often difficult to fully quantify the enormity and scale of US college sport, but with the recently announced media rights deal for the Big Ten conference, now is the perfect time to look at the rich financial workings of the NCAA’s Power Five conferences and how their current TV rights deals compare.

Announced this week, the Big Ten has just finalised the largest media rights partnership in US college sports history.

The rights deal, which includes multiple mainstream media giants Fox Sports, CBS, NBC, and NBC’s own digital streaming service “Peacock” will span 7-years, kicking off at the beginning of the 2023-24 season is reported to be worth in excess of $7 billion.

Big Ten Commissioner, Kevin Warren, recently commented on the enormity of the deal, saying: “The Big Ten Conference media rights agreements are more than just dollars and deals. They are a mechanism to provide stability and maximum exposure for our student-athletes, member institutions, and partners during these uncertain times in collegiate athletics.”

The Big Ten is the oldest active NCAA Division I athletic conference and features some of the nation’s most recognisable teams, including The University of Michigan’s famous Wolverines, Northwestern University’s Wildcats, and Ohio State University’s Buckeyes

The Big 12’s newly-extended media rights deal saw an increase of around $380 million per year on the previously negotiated contract with ESPN and Fox Sports, taking the total value to an eye-watering $2.28 billion over the six-year coverage period.

Given the seismic changes in structure and membership currently being implemented, the new media rights deal provides an element of long-term stability within the media, and financially for the conference which still boasts the likes of Baylor University’s Bears and the University of Kansas’ Jayhawks programs. 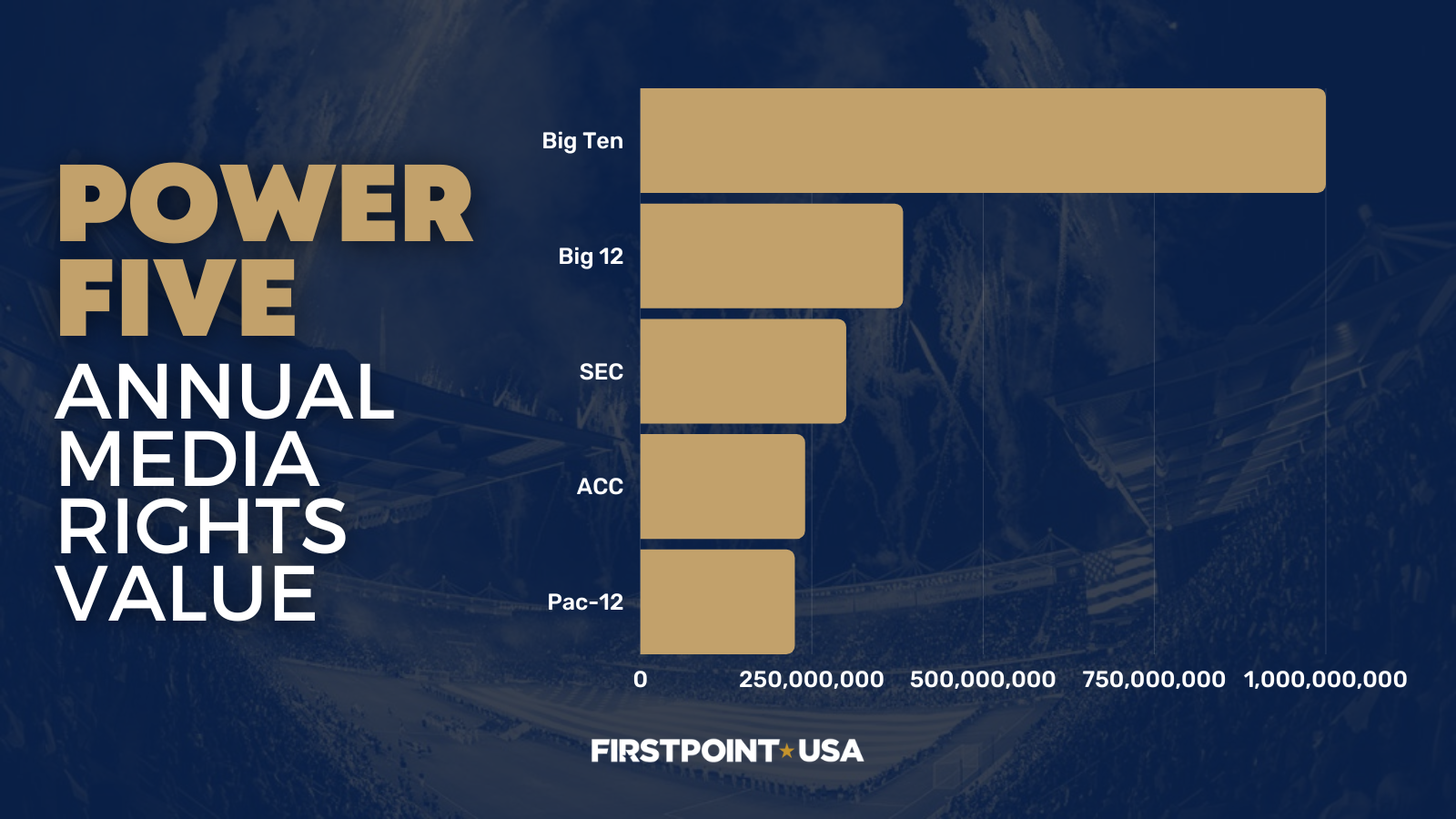 The SEC agreed to an exclusive new 10-year media rights deal back in December of 2020 with ESPN, due to begin in 2024 and worth approximately $3 billion over the duration of the contract.

The initial agreement of the ESPN Tv deal will pay the conference approximately $300 million per year in rights fees and includes a strategic roadmap of providing additional content and coverage via ESPN+, the media giants’ direct-to-consumer streaming service.

With Vanderbilt University, Texas A&M University, LSU, and The University of Tennessee all competing under the SEC banner, the conference has the star name and firepower to go head-to-head with any other in the nation.

The ACC, alongside Pac-12, has the current longest-standing media rights deal in place of any Power Five conference, having agreed to the initial terms of the $3.6 billion deal back in 2012.

The 12-year $1.8 billion agreement with ESPN was expanded through to the end of the 2026/27 collegiate season, with an additional $1.8 billion to be distributed across the member schools as part of the extension which includes multiple basketball heavy-hitters like Duke University, the University of North Carolina at Chapel Hill, Syracuse University and Wake Forest University, creating a powerhouse collection of members within the sport.

The only representative of the Power Five still yet to agree to an extension on the current media rights deal, the Pac-12 is approaching the end of a 12-year, $2.7 billion contract with ESPN and Fox.

As it stands, the combined annual value of the Power Five conference media rights agreements exceeds $2.1 billion. To put that into perspective, the current Premier League soccer rights deal, the single most popular and marketable league in the world,  between broadcasters BT Sport and Sky is currently responsible for around $1.84 billion annually, which shows the financial power and scale of college sports in the USA.

As the world’s leading sports scholarship consultancy, we have over 20 years of experience in recruiting and placing talented international athletes in some of the top programs in the United States, with world-class facilities to rival anywhere else across the globe.