Ice Hockey Scholarships in the USA.
Achieve your full potential,
with our full support. 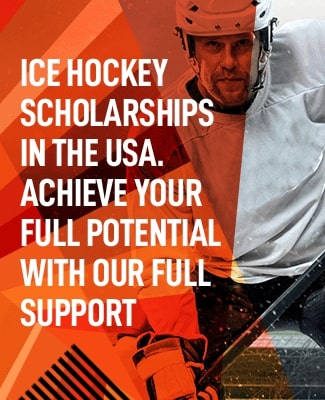 The international influence in US collegiate ice-hockey has grown steadily over the last few years and currently 26% of all college hockey players come from outside of the United State.

In total there are 163 men’s and 103 women’s hockey programs, with most of them being in the northern and north-eastern states of the USA.

How Good do I Need to be to Get a Scholarship?

You do not have to be the right size and weight but being undersized makes the process more challenging.

How Many Scholarships are Available, and Which Universities Offer Them?

Not all colleges that are eligible to offer scholarships will choose to do so. For example, Ivy League schools choose not to offer athletic scholarships.

Hockey is an equivalency sport, which means all scholarships are not full scholarships. For example, in NCAA Division I, hockey coaches can divide the value of the 18 scholarships available to them between as many players as they see fit.