Volleyball Scholarships in the USA.
Aim higher,
with our full support 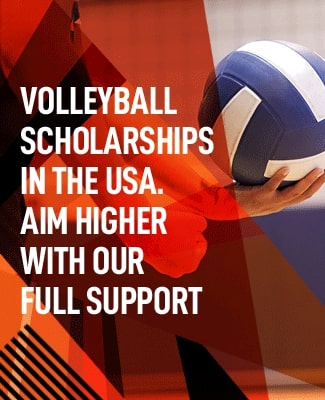 Volleyball is a very popular sport in the US, being played by about 46 million Americans. It is considered to be the most popular sport in the world after soccer, played by about 800 million people worldwide. The best young athletes from around the world enrol in US colleges and universities to compete. There is a great demand for talented international players, with squads of 10 + Volleyball players at each university. There are over 1,670 women's volleyball scholarship programs in the U.S and about 113 men's volleyball programs.

Men's Volleyball is an equivalency sport, meaning that coaches can divide the 4.5 scholarships available between as many players as they want.

As well as displaying strength and skill in passing, serving and blocking - the most common questions that coaches will ask are:

Volleyball is a highly competitive sport for obtaining a scholarship, with coaches looking for internationally experienced players. This means that the individual is more apt for the transition into collegiate, intercollegiate matches and then national competitions, if their volleyball scholarship application is deemed successful.

Volleyball Scholarships: When should I apply?

Prime time to apply for a sports scholarship in the US would be following graduation from high school or just a couple of years after. There have also been cases of applicants dropping out of UK higher education to pursue their dream of undertaking a sports scholarship in America. Athletes may only compete in college leagues if they are between the ages of 18-24, but if you are older, then the NAIA is where you will be assigned. When saying this, coaches are often more inclined to spur interest in younger prospects as it gives them more time to work with the athletes for a longer set period. Thus, it is advised to apply for a scholarship as early as possible, giving the individual an optimum chance at maintaining the strongest performance, athletically and academically, to achieve a highly regarded degree to then move onto the opportunity of turning professional.

Volleyball scholarships: How good do I have to be?

How many Men’s Volleyball Scholarships are Available?