A Guide to Track, Field & Cross-Country Scholarships in the USA

Following the historic participation figures for current and former US college student-athletes at the 2020 Olympic games, the interest and demand for athletic scholarships are continuing an upward trajectory, with Track & Field front and centre.

Over 1,000 student-athletes across multiple disciplines including athletics participated two years ago in Tokyo on the grandest of them all, taking home a record 124 medals, 41 of which were gold, 41 were silver, and 42 bronze. World-renowned Stanford University led the way with a total of 26 medal-winning athlete alumni, followed closely by the interstate rival University of Southern California, and the University of Florida with 21 and 17 athlete alumni taking home silverware respectively.

How are scholarships allocated?

Within the collegiate system, there are over 950 different schools with a men’s competitive track & field program, and over 1,000 that offer a women’s program. Like most sports across the NCAA, NAIA, and NJCAA, athletic scholarship funding for track & field athletes are awarded on an equivalency basis, which means the coaches have a limited number of scholarships to divide amongst the student-athletes on the team.

For NCAA Division I and II, the men’s scholarship limits per track & field team (including cross country) are set at 12.6, with D-I carrying an average team size of 39 athletes, and D-II with around 34 athletes. As NCAA D-III teams do not qualify to allocate athletic scholarship funding, the student-athletes will rely on additional financial support such as academic or need-based scholarship funding. 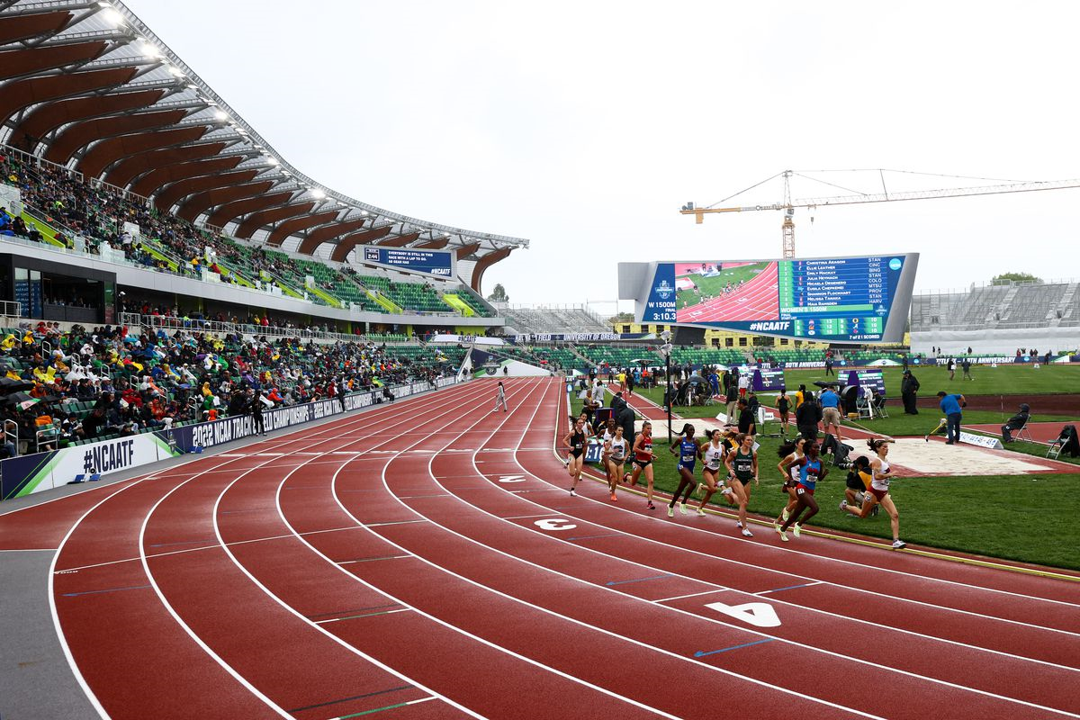 What is the format of the college Track & Field Season?

With term at US universities starting in mid-August, Cross Country preparation begins early as athletes build toward Conference Championships at the end of October. Teams typically race at several invitational meets in the build-up to Conference.  The highest performers will qualify for Regionals and then National Championships in late November. 31 women's and 31 men’s teams are selected to compete at the NCAA D-I Championships. 38 additional individual men and women are also selected to compete.

The build-up to outdoor competition begins with invitational meets in April and the top 48 ranked athletes in every event as well as the top 24 Decathletes and Top 24 relay teams will be invited to Regional Championships in May.

From each region, the top 12 individual performers in every event and the top 12 relay teams will be invited to the National Championships in June.  603,000 viewers watched the final day of the 2022 NCAA D1 Championships. The 2023 Championship will be held at Mike A. Myers Stadium in Austin, Texas.

Do I qualify for a track & field scholarship?

The below table provides guidelines of times and distances which can be used to evaluate your own personal bests and how you compare at each division. Please note, the figures below are not an exact science, they are merely used as an example to identify the spread of performances across each division * Athletes who are closer to the ‘top standards’ within the division have a stronger chance of gaining a scholarship whilst those closer to the lower standards may still be able to compete for the team.

Raw numbers aren’t enough to secure a life-changing scholarship in the USA, however. Coaches look at all aspects of your academic and athletic career to date and will consider other factors like upward performance trajectory and future potential, so if you’re consistently progressing and improving your times and records, this will help your application. Versatility is also a factor that will weigh heavily in your advantage, if you’re experienced in competing in more than one event, such as mid/ long-distance and cross country. Sprinters with relay experience will be more attractive to universities.

Another thing college coaches, and admissions staff will look at when reviewing applications is your off-field interests and skills, particularly those that indicate your suitability across the school’s culture, values, and ability to contribute to overall campus life – including things like playing a musical instrument or getting involved in extra-curricular activities and clubs.

As the world’s leading sports scholarship consultancy, we have over 20 years of experience in recruiting and placing track & field athletes in some of the top programs in the United States, with world-class facilities to rival anywhere else across the globe.

For more information on the life-changing opportunities for young men and women that a track & field scholarship in the USA can provide, why not get in touch with our recently appointed Associate Director of Athletics, Laura Kerr: laura.kerr@firstpointusa.com